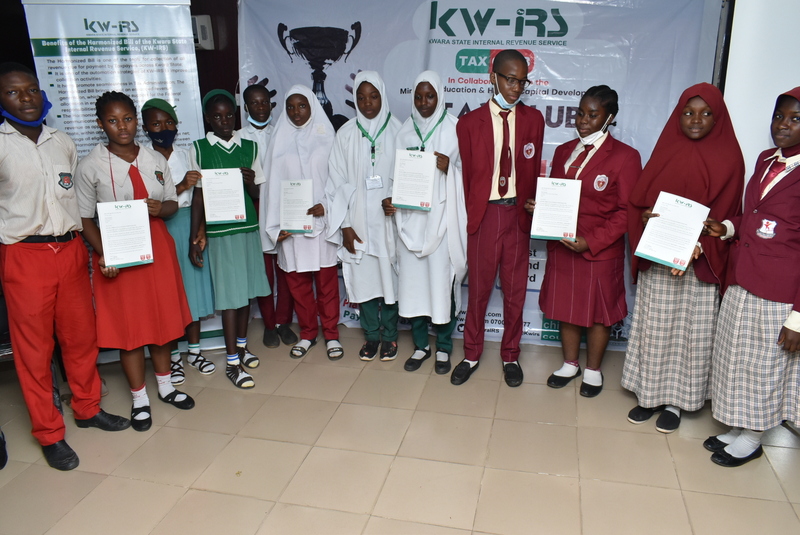 The preliminary stages of the 2021 Tax Club Quiz Competition to shortlist the overall best Six Schools from each senatorial district of the State was concluded today Monday 12th July 2021.

The first of its kind Computer Based Test (CBT), Tax Quiz Competition for Secondary Schools in the State started with schools in the Kwara North and South on 5th, 6th and 8th of July, 2021, and had produced Eighteen (18) schools across the State; six (6) from each of the three Senatorial Districts.

A total of  One Hundred and Forty-Two (142) schools expressed interest in the competition for the year 2021 across the State.

The schools in Kwara Central, today, 12th July 2021, converged at the CBT centre of KW-IRS at its phase 3 office on Irewolede Road, Ilorin, for their turn of the first and second rounds of the Tax Quiz Competition.

Earlier in their separate welcome addresses, the Convener and Chairman of the competition, Titilayomi Ogunwale and Babatunde Salawu, on behalf of the Executive Chairman, KW-IRS, Shade Omoniyi, commended the participating schools for making it to the 2021 Tax Club Quiz Competition, adding that the competition is parts of the KW-IRS community Impact programme and tax advocacy initiative, aimed at building enlightened and tax compliant citizens and developing the Kwara we all desire.

The participating schools were also charged to put in their best and avail themselves, the knowledge the exercise is to inculcate into them.

The event, organized by the Kwara State Internal Revenue Service (KW-IRS) in collaboration with the Kwara State Ministry of Education and Human Capital Development had in attendance, the KW-IRS Tax Club Advocacy Committee, Educationists in the State and other staff of the Service.

The Eighteen schools that have sailed through the preliminary stages will compete at the semi-final and thereafter the final in November 2021, where the overall best three (3) schools would emerge.