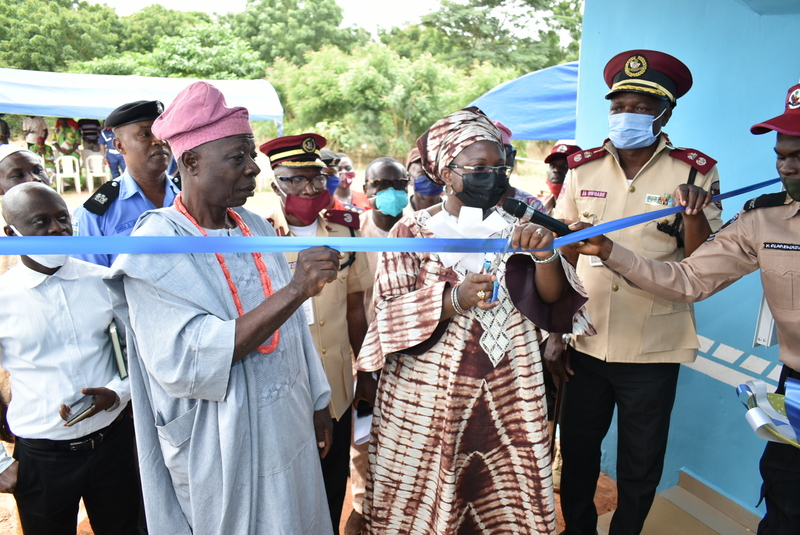 Shade Omoniyi in her opening address at the event expressed appreciation to the Elerin of Erin Ile, His Royal Highness, Oba Abdulganiyu Ibrahim Olusokun II and the entire Erin-Ile community for the generosity exhibited through the donation of land to the Kwara State Government for the construction of the Federal Road Safety Corps (FRSC) Driver’s License Centre, to serve motorists within Erin-Ile community and its environs and in turn bring about improved revenue generation for the State.

Omoniyi lauded the gesture of the Erin-Ile community, which is geared towards community and State’s development, saying it is unique and unprecedented since the inception of the Service and her assumption of office as the Executive Chairman.

She noted that the location of the new Driver’s License Centre in Erin-Ile town is strategic, leading to other neighbouring communities and States, where different business transactions are executed, and as such the centre will remain a utility point to cater for all needed documentation as its concerns vehicles and other means of transportations.

The KW-IRS boss enjoyed commercial and private motorists to embrace the new facility by patronizing it, so it could be sustained for the use of the community.

Omoniyi further applauded the FRSC for the simplification of the processes involved in the registration and renewal of Driver’s License to a maximum period of two weeks as opposed to old processes that last months to get licensed. She confirmed that KW-IRS has provided the needed equipment for the centre to run smoothly, alongside siting Motor Licensing Authority (MLA) office in same facility for processing of vehicle documents.

Speaking at the event, was the Elerin of Erin-Ile, Oba Abdulganiyu Ibrahim Ajibola Olusokun II, represented by Chief M.S. Ojo. The paramount ruler, through his representative, described the establishment of the new Driver’s License Centre in the Erin-Ile Community as an act that will ease problems associated with traveling miles to obtain needed vehicle documents.

The Elerin of Erin-Ile, enjoined individuals, transport associations and unions operating in the community to desist from traveling to neighboring States for their Driver’s License and vehicle documents to improve revenue generation for Kwara State and develop the community.

Oba Olusokun II also commended the tripartite contributions and willingness of the KW-IRS, FRSC, and VIO and their resolution to providing quality service to the people of Erin-Ile and its adjoining communities.

In their separate remarks, the Sector Commander, Federal Road Safety Corps (FRSC) Jonathan Owoade, and the Erin-Ile Unit Commander, ACC K.A Oluwasiku, also applauded the entire people of Erin-Ile community and the Erin-Ile Progressive Union (EPU) for deeming it necessary to donate the piece of land to accommodate the FRSC Driver’s License Centre.

The representative of the Erin-Ile Progressive Union (EPU), P.F Irewolede, praised the Elerin of Erin-Ile and the National President of the Union for their immense contributions towards the establishment of the Centre in Erin-Ile community.

Giving the closing remarks, the Ag. Director, MDAs, KW-IRS, Olatunji Balogun, reiterated that the new centre is a one-stop-shop that contains Motor Licensing Authority Office (MLA), Driver’s License unit, and the Vehicle Inspection Office (VIO), and all offices and units in the building are fully equipped to serve the needs of motorists within and outside Erin-Ile town.

Others that graced the occasion were chiefs and members of Erin Ile community, members of the Road Transport Union Workers, and other major associations and unions from Erin-Ile, Kwara State.