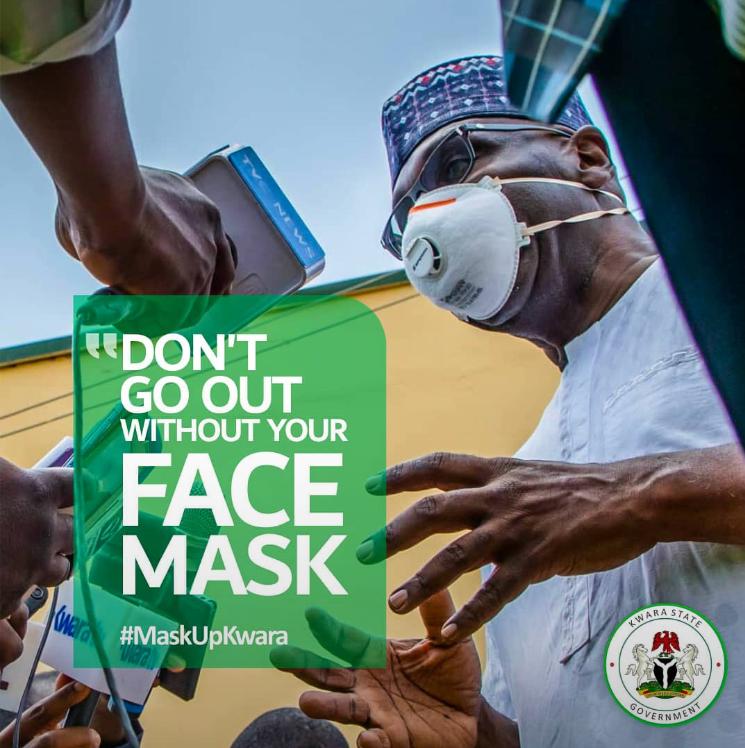 Residents of Kwara State must use a face mask in public places, keep physical distancing or stay indoors beginning from Friday July 24th, the government announced on Monday, tracing the spike in cases of COVID-19 largely to people not adhering to safety protocols.

The government added that violators of the latest directive — including shop owners and drivers of commercial or private vehicles —risk arrest and prosecution from July 31st under the Kwara State Infectious Diseases Regulations 2020.

Chief Press Secretary to the Governor and Spokesman of the State Technical Committee on COVID-19 Rafiu Ajakaye told a news briefing in Ilorin, the state capital, that the government is disturbed by the rising cases in the state and would spare no effort to flatten the curve and protect the people.

He added that the government would meet with the leadership of the Muslim community on Wednesday, July 22nd  to discuss the upcoming Eid-ul-Adha — a period of mass gathering and celebration —and agree on the safest way to curb further spread of the virus.

Ajakaye said both Governor AbdulRahman AbdulRazaq and his Deputy Kayode Alabi have both undergone tests for the virus which came back negative, adding however that a few workers in Government House have tested positive and are being managed at the infectious diseases centre.

The text of the briefing reads:

“As at yesterday Sunday, July 19th, we have recorded 585 confirmed cases of COVID-19. Out of this, 367 are active while 204 had since been successfully managed and discharged to rejoin their families. We have also recorded 14 deaths so far.

“While testing of more samples has played a key role in the spike of the figures, the truth is that most of our people are simply not complying with safety measures put in place including physical distancing and the use of face mask despite the earlier mass production and distribution of face masks to members of the public.

“The rising cases represent a grave danger to not just public health but also to public resources and infrastructure which are already being stretched. Whereas the government is doubling up its advocacy across all media platforms, including jingles and radio programmes, the time has come for everyone to take full responsibility and act more responsibly as we confront this pandemic.

“Consequently, effective this Friday 24th July 2020, nobody would be allowed into any public building, markets, malls, transport, banks, and so on without their proper use of the face masks as a safety measure to lessen the transmission of the virus.

“By Friday, July 31st, 2020, however, the government would commence strict enforcement of the Kwara State Infectious Diseases Regulations 2020. Thenceforth, anyone seen outside without proper use of the face mask will be arrested, prosecuted in a mobile court, and taken to any of our quarantine centres. Their samples will then be taken and they will be held until their status is known. We want to emphasise that shop owners or business managers, drivers of commercial or private vehicles who allow persons without face masks into their shops or vehicles would be arrested alongside offending passengers and be taken to quarantine centres, have their samples taken and be held until their result is out.

“Similarly, this Wednesday, July 22nd, the government will meet with the leadership of the Muslim community in the state under his Eminence the Emir of Ilorin to decide on the safest and best approaches ahead of the Eid-ul-Adha (ileya) which tentatively holds on 31st July, 2020.  The outcome of that dialogue shall be made public and enforced accordingly.

“Fellow Kwarans, let us act more responsibly. COVID-19 is real. His Excellency and his deputy have both undergone their own tests. The two of them have tested negative. But a few members of staff of Government House, as you may be aware, have tested positive to the virus. Let us stay safe by abiding by all the safety protocols. The raids the government recently held on a night club in Ilorin will be a routine exercise to stop the flagrant violations of safety measures. Also, government restates that clubs, drinking joints, football viewing centres, and parties with more than 25 persons remain shut.”