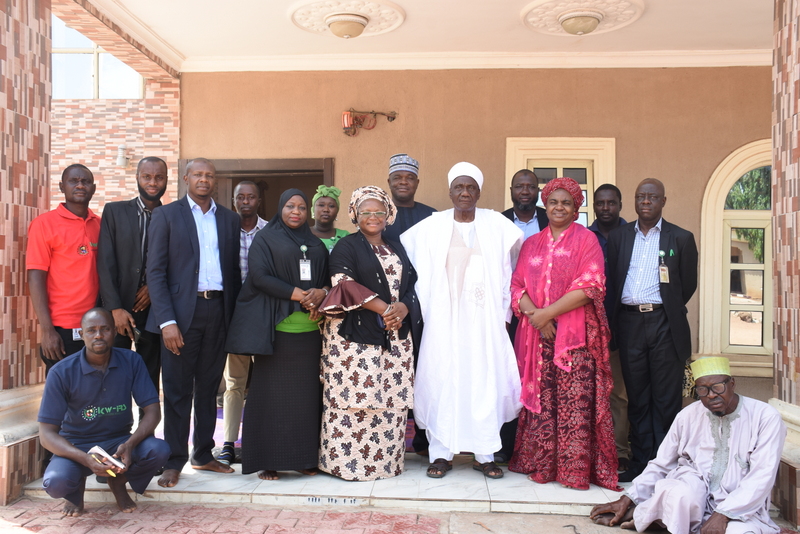 For ease of tax collections and familiarization with people at the Grassroots, the Executive Chairman Kwara State Internal Revenue Service, Shade Omoniyi led a team of Management Staff to Baruten Environs for a two-day courtesy visit on the 10th to 11th March 2020.

The courtesy visit started at the palace of the Emir of Ilesha Baruba where the Head, Research Department, Mr. Mohammed Audu introduced the KW-IRS Team led by the Executive Chairman, Shade Omoniyi to the Emir.

The Executive Chairman, Shade Omoniyi in her opening statement expressed her delight in the way the Emir warmly received the team. She went further by apologizing to the Emir for not visiting since her assumption of office in October 2019.

Shade Omoniyi however, stated the purpose of the visit amongst which were; to seek for support and guidance of the Royal Father, to intimate the Emir and the people of Ilesha Baruba on the decision of the Federal Government to ensure maximum compliance on the payment of Road Taxes.

She pleaded with the Emir to educate the people of Ilesha Baruba to renew their vehicle and driver’s licenses and try to change their old number plates to new ones and also appealed that the people should adhere strictly to this rule to avoid being enforced.

She also elucidated further by mentioning that the Service had since January created Area Offices across the 16 Local Government Areas of the State for ease of Tax Collection and sensitization across the State.

Shade Omoniyi, stated to the Emir that the Service is trying to partner with Immigration Service to know who moves in and out of the border through the Baruten Axis to have a track record of taxable business activities.

Speaking on, she spoke to the Artisans present at the palace to move closer to the Revenue Officers in their locality to have a smooth and clear understanding of Revenue payments.

Prof. Halidu Abubakar expressed his contentment with the Administration of Governor AbdulRahman AbdulRazaq on the way by which taxation is being maximized.

In a lighter mood, he said being a Professor of Public Finance, he would have loved to take off his turban and start working as a tax professional like the Executive Chairman and her Team.

The Emir said Kwara seems to be the first state in the Northern Region to start a full-fleshed Internal Revenue Service which is quite commendable.

He emphasized that he is not going to talk as a Traditional Ruler but rather as an observer stating that Traditional rulers play a vital role in the collection of Taxes because if there is no support from them, the collection might be difficult.

His Royal Highness also stated that he is indeed elated that the Service has recognized advocacy as the major tool for ease of revenue collections.

He mentioned that the Collection of Personal Income Tax alongside under taxes is given utmost attention by seeking more support from the Traditional Leaders who must sincerely buy into the Government’s effort.

In his closing remarks, he specified that there is no way we can have a responsible government without taxation because the economy is based on people’s effort and not the oil boom. However, he wished the Governor a productive tenure that will bring great change to the state.

The next stop was the Palace of the Emir of Gwanara, His Royal Highness, Alhaji Sabi Idris (OFR) who was very glad to have the Executive Chairman and her team visit his palace.

Shade Omoniyi expressed her sincere apologies for not visiting the Emir earlier as she had some high demands on her new assignment as she assumed office. She, therefore, sought the support of the Emir and the good people of Gwanara.

The Executive Chairman also reiterated the importance of moving closer to the people and ensuring that all forms of revenue are collected as and when due. The Area Coordinator of Baruten Area Office, Abdulazeez Biriso was also introduced to the Emir alongside his cabinet members.

In her statement, she affirmed the support of the Government to the people of Kwara North and also mentioned that the Service in its little way will continue to support the people of Gwanara according to the capacity of the Service.

The spokesperson to the Emir (the Secretary of the Emirate Council), expressed their gratitude on behalf of the Emir, to the KW-IRS Team for the visit.

He assured that the people of Gwanara will continue by all means possible to support the Government led by AbdulRahman AbdulRazaq in ensuring that all forms of revenue from their end comes into the government coffers to ensure the desired growth and development.

The Emir affirmed that the Country lacks organization in general but KW-IRS structure remains one of the best in terms of quality of Service delivery, consistency, conducive working environment and top professionals which is unarguably a standard that other states must follow.

He thanked the Executive Chairman and her team for the kind gesture and wished them a high level of productivity in their revenue drive.

Shortly after, the visit for day one ended at the palace of the Emir of Okuta, His Royal Highness, Hon. (Dr.) Alhaji Idris Sero Abubakar, where the Executive Chairman started by apologizing for not coming since her assuming office in October 2019.

Shade Omoniyi, solicited for the Emir’s support to deliver the message of Taxation to the community and to admonish the people on the importance of prompt payment of taxes.

The Executive Chairman Introduced the Area Coordinator to the Emir and told the Emir that the payment of Road Taxes as become necessary and of high importance in the state.

She, therefore, pleaded with the Emir to sensitize his people to renew their vehicle license and all other documents required to ply the road.

The Emir was so appreciative of the visit and expressed his gratitude. He mentioned that since the inception of KW-IRS, the sensitization process was to send the field officers to come to the palace and none of the Top officials of the Service deemed it fit to visit.

He, therefore, commended the Executive Chairman, Shade Omoniyi and her team for such a brilliant initiative. He assured her of his full support and commitment to the mobilization of Revenue in the State.

On arrival to the Palace of the Emir of Yashikira, His Royal Highness, Alhaji Usman Sariki, on the 11th March 2020, the opening prayer was said by the Imam of Yashkira after which the introduction of the guest was done by Mr. Mohammed Audu the Head of Research Department at KW-IRS.

Mohammed Audu shared an insight into the purpose of the visit which is primarily to seek the Emirate’s support for the advancement of the State’s economy.

The Emir who was unavoidably absent was represented by the Queen mother, Hajia Salimata “The Yon Kogi of Yashkira. Ayuba Idris the Aboki Sarki introduced the representatives of the Emir at the palace.

Shade Omoniyi appreciated the cabinet and told them the major reason for the courtesy visit which was to solicit for support, she requested that the Queen Mother should help talk to the people at the grassroots the importance of paying taxes.

She introduced Abdulazeez Biriso as the Area Coordinator of the Baruten Area Office and told them to relate any tax-related issues with him.

Shade Omoniyi expressed her happiness seeing so many women at the palace, pointing out the fact that the Governor has put more women in his cabinet. She also mentioned that whenever we get women involved with things it gets done.

The Queen Mother appreciated the Chairman and her team for their visit, she prayed that Allah will take them safely back to their base. She assured the Executive Chairman that they are going to give 100 percent support to do whatever KW-IRS wants. She also said that she wants the Government to help the women. She mentioned that the Women should be empowered in their Community and she wished the Executive Chairman success in her assignment.