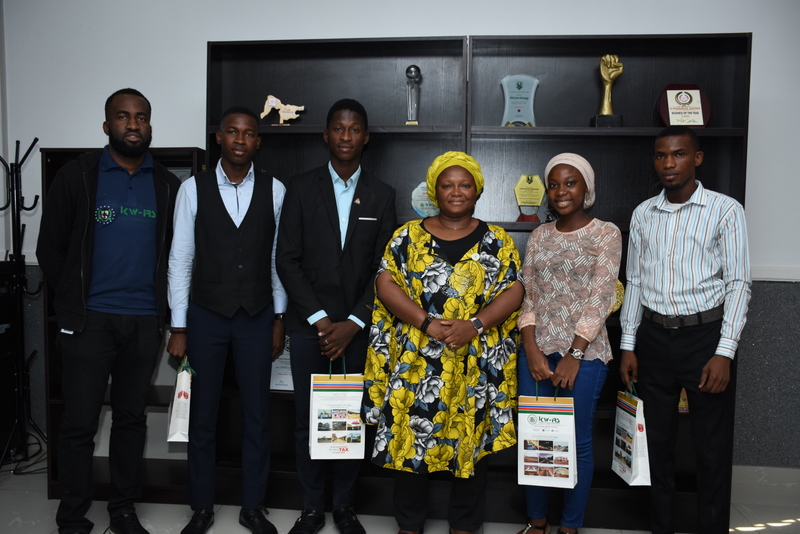 The Executive Chairman of KW-IRS, Mrs. Shade Omoniyi, on the 5th March 2020, hosted young tax enthusiasts from the University of Ilorin (UNILORIN) Tax Club and the National Association of Nigerian Students (NANS) at the Service’s corporate head office.

The President of the UNILORIN Tax Club while speaking in his opening remarks, expressed their gratitude towards the Executive Chairman for the opportunity to meet her and the support they have received so far.

KW-IRS’ Head of Corporate Affairs Department, Temi Kolawole introduced both parties and the interactive session started with an articulate presentation by Kalejaiye. Highlights of the presentation were the Club’s journey so far since its inception and the 2020 blueprint.

The Club’s president noted that one of their major activities, the Ilorin Tax Walk, carried out in collaboration with KW-IRS staff, has largely accomplished its purpose to interact with taxpayers, know their grievances and solve some tax administration problems.

He, therefore, sought the Service’s support in their future undertakings as this would go a long way in equipping the young tax enthusiasts and also improve the level of awareness across the State.

He highlighted that the club’s approach is to tax advocacy is to educate, facilitate and innovate, and also stated that its National Tax Colloquium, tax education, and tax competition are primarily targeted at raising a generation of tax enthusiasts.

During their courtesy visit, the association thanked the KW-IRS Executive Chairman for the opportunity to see her and equally commended her on the positive transformation witnessed in the Service so far.

Wasiu stated that the central aim of their visit was to strengthen the existing relationship between their association and KW-IRS.

He equally requested KW-IRS’s sponsorship in its Entrepreneurship Competition, its welfare plan for students across six higher institutions, as well as the association’s news bulletin one of which was gifted to the Executive Chairman.

Mrs. Shade Omoniyi, in her response during the different sessions with the teams of youngsters, expressed her delight in engaging with students. She emphasized that educating the younger generation is key and as such, education has been incorporated as one of the Service’s 6 E’s

While applauding the executive members of the UNILORIN Tax Club for their vast knowledge of taxation, she acknowledged that having young people interested in taxation will make work easier for revenue administrators.

In her motherly manner, she admonished the groups to seek out other stakeholders who would promote their causes. She asserted that it was KW-IRS’ responsibility and the Service is ready to support them within the ambit possible.