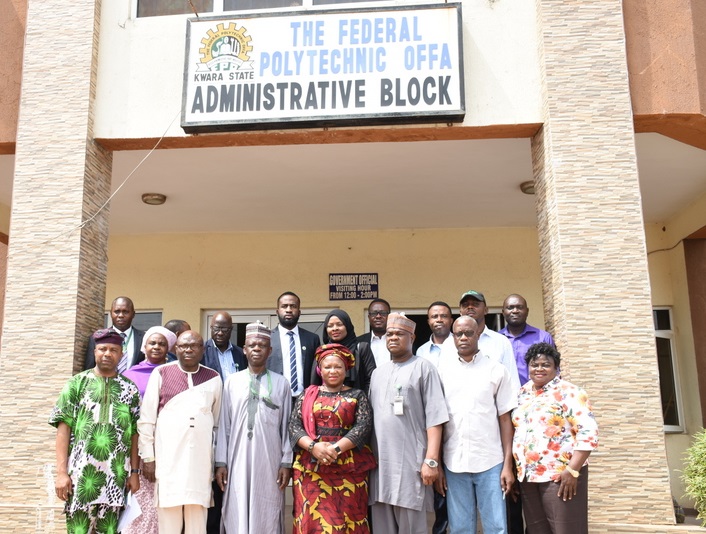 In a bid to get closer to its highest-paying taxpayers and create a seamless tax administration process, Kwara State’s revenue-generating agency, KW-IRS visited the Federal Polytechnic Offa on Wednesday, 4th March 2020.

The Director of Protocol at the Federal Polytechnic Offa, Mr. Olayinka introduced the Principal Officers of the Polytechnic and the Head of Corporate Affairs Department at KW-IRS, Mr. Temi Kolawole also did same by introducing the KW-IRS Team.

However, the purpose of the visit, as pointed out by Shade Omoniyi, the Executive Chairman, Kwara State Internal Revenue Service (KW-IRS), was to break the ice and stop the tradition of under-deduction and under-remittance.

In a brief welcome address, the institution’s Rector, Dr. Lateef Ademola Olatunji, expressed his delight at receiving the team from KW-IRS. He remarked that this was the first visitation from executive members of the Service; thus, he felt highly honoured and pleased.

He noted that given that he identifies tax as a compulsory levy; Federal Poly Offa has tried to be consistent with its payment of tax.

He, therefore, implored KW-IRS to continue putting taxpayers’ money into good use, noting that this will serve as an incentive, particularly for those with a lackadaisical attitude towards paying taxes.

Mrs. Omoniyi stated that aside from creating a closer rapport with taxpayers, the visit was equally targeted at educating them and consolidating the narrative that the AbdulRahman AbdulRazaq administration is not just about generating revenue but about giving back to the society.

She pointed out that in the past one year, the new administration has recorded notable achievements such as the renovation of 31 secondary schools and bringing electricity to communities that have never enjoyed it.

The Executive Chairman encouraged the faithful remittance of tax. She stated that although KW-IRS was not directly involved in the expenditure of revenue.

However, she reiterated that through the collaborative effort of the revenue-generating agency and the taxpayer, the government will be enabled to carry out its developmental projects.

The round-table session ended with the exchange of gifts between both parties, the national anthem, and group photographs.