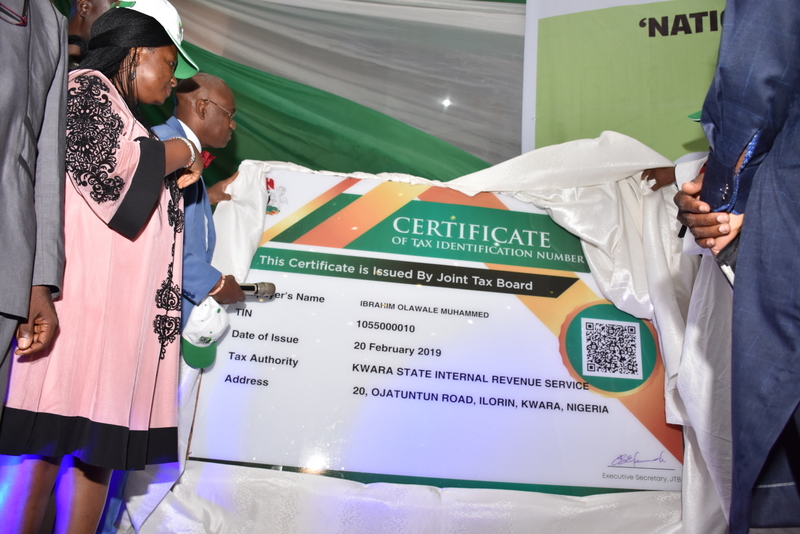 The Executive Governor of Kwara State, Mallam AbdulRahman AbdulRasaq has declared that prompt tax payment by citizens of any country is of immense importance and also pertinent to socio-economy development of the State.

Governor AbdulRahman who was represented by his deputy, Mr Kayode Alabi, stated this at the North Central Regional Flagoff ceremony of the New Taxpayer Idenfication Number (TIN) organised by the Joint Tax Board (JTB)in collaboration with Kwara State Internal Revenue Service (KW-IRS) in Ilorin, held on the 3rd of October 2019 at the Government House Banquet hall.

The Governor emphasized that tax payment is a compulsory act that must be acceptedby every individual who desire change in the society.

AbdulRahman said, with the launching of the new Taxpayer Identification Number, Registration System and Consolidated National Taxpayers Database, there will be a more simplified tax process and coverage of taxpayers across the North Central Region and Nigeria in general.

He commended the effort of the Executive Chairman of the JTB and Federal Inland Revenue Service (FIRS), Mr Babatunde Fowler and his associates for putting up an intiative that will further increase awareness on tax payment and create a more unifying database for taxpayers across Nigeria.

In his own opening remarks, the FIRS Boss, Mr Babatunde Fowler said, the official launching of the New National TIN Registration System and Consolidated Taxpayers’ Database was carried out by His Excellency, the Vice President of the Federal Republic of Nigeria, Professor Yemi Osinbajo, SAN, GCON, on the 1st of July, 2019 in Abuja and it marked the official Go-Live of the New TIN Registration System at the national level.

Fowler said, since the official Go-Live in Abuja, similar exercises have been scheduled to be replicated in all the six Geopolitical Zones in the country.

He explained that the first regional flag-off ceremony took place in the South-West geopolitical zone in Lagos State on the 18th of July, 2019 and Ilorin, the Kwara State capital was selected as host for the second in the series for the North-Central geopolitical zone.

He said, the choice of Kwara State to play host for the North-Central Regional flag-off event was deliberate and strategic based on recognition of the landmark role it has played in the quest towards ensuring sustainable internally generated revenue profile for the State as well as for the region.

In his words “Having achieved a 221% increase in its collection, from N7.1 billion in 2015 at the time of attaining its autonomous status, to N23 billion in 2018, Kwara State IRS has come to be a benchmark for revenue authorities, not just within the North Central region, but nationwide as well. It is also worthy of note that KW-IRS is also the only State Revenue Agency in the country to have been ISO certified, with the ISO 9001 for Quality Management System and ISO/IEC 22301 for Business Continuity Management System.

The FIRS Boss further mentioned that the new TIN Registration System introduced by the Joint Tax Board (JTB) will help enhance efficiency, convenience and output of the entire tax administration process especially on the part of taxpayers and tax administrators, while guaranteeing that each taxpayer’s details are readily available to them at their fingertips at all times and anywhere irrespective of their location.

According to Fowler, “The significant feature of the new system is that it possesses the capability to integrate with all relevant agencies by leveraging on already captured data. It has ability to deploy analytics to discover underlying correlating trends and patterns; a better visibility of the taxpayer is assured inherently leading to increased Internally Generated Revenue (IGR) for all tiers of government and it also reduces the burden of taxpayer information management, while at the same time significantly reducing the cost of collection”

In his remarks, he added that the new system will maintain identification of individual taxpayers using the unique and universal Taxpayer Identification Number (TIN), compared to what is obtainable in the previous system; it is now possible for all taxpayer to view , retreive or update his/her tax profile from anywhere on the go.

Earlier, Chief (Sir) Oseni Elamah, also informed the congregation that the new TIN registration system improves on the efficiency and output of the tax administration process and meant to provide enhanced convenience to the taxpayers as well as the tax administrators.

In her own separate closing remarks, the Executive Chairman of the Kwara State Internal Revenue Service (KW-IRS), Mrs Shade Omoniyi thanked the Executive Governor of Kwara State, Mallam AbdulRahman AbdulRazaq, JTB and the entire organizing committee of the launch ceremony for putting up an highly influencial initiative that will further improve tax administration in Nigeria.

In her words “this initiative of the New JTB National TIN registration system is the heartbeat of proper taxpayer identification and payment collection. It has utilized modern technologies to bring together existing data from several sources in an ingenious way to make the enrollment and administration process seamless and effective. JTB has also set a new standard in data sharing across agencies in Nigeria.

She assured that the KW-IRS has already integrated the new TIN system into its operation and will further ensure that all taxpayers in the State comply to its use as a compulsory requirement.

She promised to improve revenue mobilization for the State using her wealth of experience.